I recently caught up with my good friend Rick, the photographer behind street style site Icon Americana.  He agreed to snap some photos of me, and though I hadn't previously planned to use them for a post, the results immediately put me in mind of the minimalist sculpture of Donald Judd. Judd (1928-1994) was born in Missouri, and went on to attend the College of William and Mary and Columbia University where he studied Philosophy.  Judd's academic background lends itself to his work, the basis of which is steeped in theory and criticism. Judd himself detested the term Minimalism, and dealt with this aversion, as well as others, in his well-read and publicized essay Specific Objects (1964). 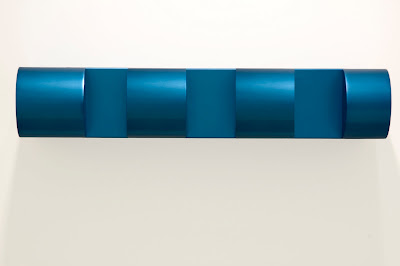 Judd's mature work takes into account positive and negative space as well as the surrounding environment.  His sculptures are not meant to depict or represent anything; they are simply meant to exist and interact with the viewer and the surrounding land- or wall-scape. 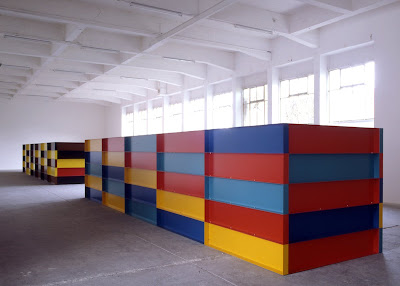 After seeing Rick's photos of me, I was struck by the way the surrounding blue scaffolding resembled a Judd sculpture, and the interaction between the dueling vertical and horizontal stripes of my dress.
I'm wearing a thrifted dress, H&M necklace, Falke tights, and Ecote suede pumps. Thank you so much to Rick for the wonderful photos!  You can find his full post here, and much more inspiration at Icon Americana.
[Judd images from youhavebeenheresometime.blogspot.com, galleryvedovi.com, and leconsortium.fr, respectively.]
Posted by Artfully Awear at 9:15 AM